Our trip to Hamburg with TEFAL

OMG we’re so full. How is that possible? Well, we have an idea. It might be connected to the last 2 days of simply just eating. But first  things first.

At the end of August we got a request from Tefal. It said if we were interested in getting to know the new mycookingguide pan with other foodbloggers in Hamburg.

One of the world’s largest pan and cooking appliances manufacturer asked US if we were interested in testing the new pan. Well, we didn’t have to think about it very long, because one thing was sure: We definitely did want to.

So, yesterday was the day and we took off to Hamburg (which we seem to like more and more). Yes, we are writing this article in the train.

So after we arrived in the hotel and went for a run, prepared ourselves and were ready to go, we met Laura from TryTryTry (funny coincidence, since last week she is in our blogroll) , Thomas from BaconzumSteak (knows everything about meat), Stefan and Patricia from the-kaiers.de (YAY another blogger-couple) and Graziella from Graziellas Foodblog (who is gonna win a famous german TV show soon 😉 ) as well as everyone of the organizing team and the great guys from Becker Döring Communication. We all got along very great from the beginning and so we went (well, we drove due to some girls shoes) to Henssler&Henssler. Afterwards we went for a drink but then quite fast to bed because the next day was about the pan and more food.

We got up, had some breakfast, visited the “Frischeparadies” (you can buy almost everything concerning food there) with Stefan Dadarski and went to Steffen Hensslers kitchen to cook something with the new pan. With Stefan Dadarski and Tobias Frerks we cooked asparagus, then teriyaki steak and fried ice for dessert. 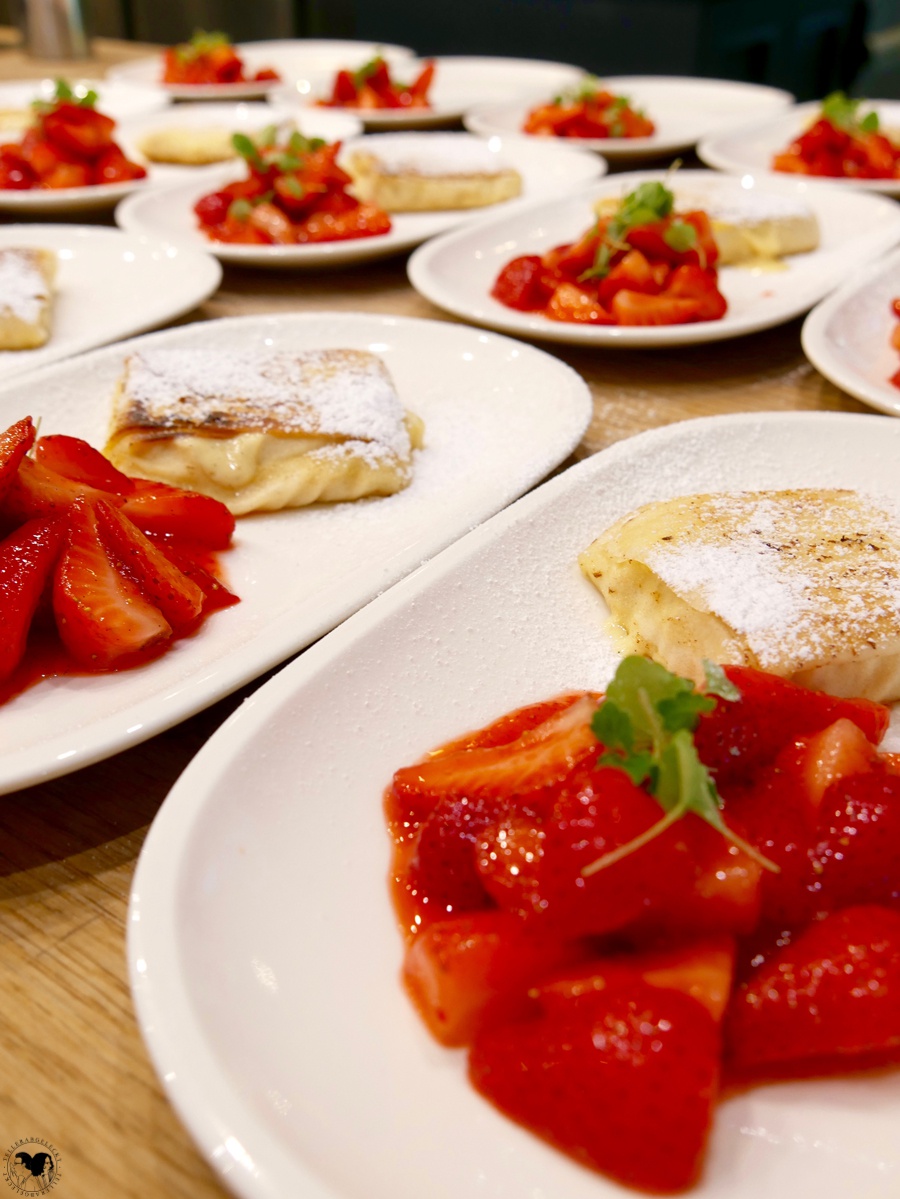 The mycookingguide pan has an integrated heat sensor at the bottom that measures the heat. There is a module at the end of the handle, where you can set which heat you would like to have. It has 3 levels: a) gentle frying, b) usual frying and c) searing. While the pan heats up, the arrow points at blue, as soon as the right temperature is reached, it turns to green and if the pan gets too hot for what you set up, it turns to red and gives you an acoustic signal that the pan is too hot.

We really think that this is perfect for beginners who are not too confident and it makes learning to cook really easy so we’d say that there is no excuse left for not learning how to cook. Everyone has to start at one point and this device really helps with that process and if you have to do a whole meal for example this might be quite handy as well because you don’t have to watch everything, just make the right settings and care about other stuff. you can’t put the pan in the oven because it is too hot for the sensor.

Here we go, recipe. we made some green asparagus with coriander-pistachio-tapenade. Our trip to Hamburg with TEFAL

schluf OMG we’re so full. How is that possible? Well, we have an idea. It might be connected to the last 2 days of simply just eating. But first  things first. At the end of August we got a request from… Allgemein Our trip to Hamburg with TEFAL European Print This
Nutrition facts: 200 calories 20 grams fat
Rating: 5.0/5 ( 1 voted )

We thank Tefal a lot for being invited and participating at this event.